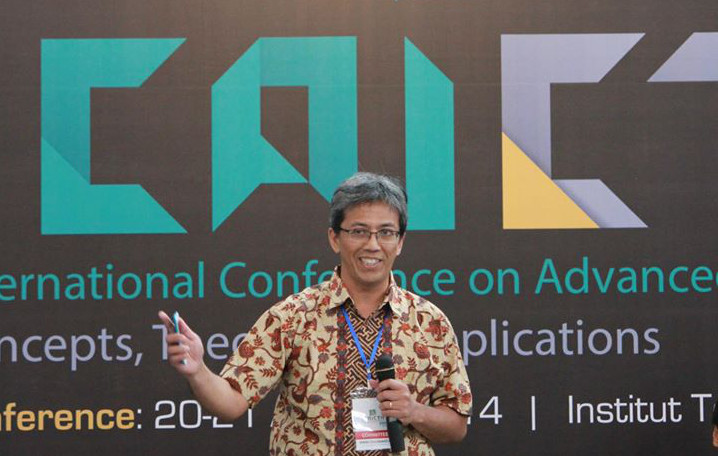 On August 20-21, 2014 Hans attended the International Conference on Advanced Informatics: Concepts, Theory, and Applications (ICAICTA) 2014 at the Institut Teknologi Bandung (ITB), Indonesia. The campus is not foreign to him; ITB is his alma mater as an undergraduate student. He was on a mission to accomplish two goals: deliver his keynote speech and present his latest work on a music-related Android app.

The app presented at the conference began as a showcase app for his students who were developing a guitar tuner app in one of their programming projects earlier this year. After a quick review of what he learned in a Digital Speech Processing course as a graduate student, he continued to add more features to the showcase app until it turns into a music recording and transcription app. The implementation details of this app is describe in his paper: “Implementation of a Monophonic Note Tracking Algorithm on Android“.

Besides presenting the paper, Hans was also invited to be one of the two keynote speakers at the conference. The other keynote speaker is Prof. Hitoshi Isahari (Toyohashi University of Technology, Japan). Using a cryptic title for his keynote speech “+10 0000”, Hans began his presentation by asking the audience to guess the hidden meaning of the (binary) title.  A few binary savvy programmers among the audience correctly guessed the number +32. Hans chose this number as the hidden title because it was 32 years ago when he was admitted to ITB in 1982. The main message of his keynote speech revolves around geometric tools used in Computer Graphics and how they evolved within the last 32 years.