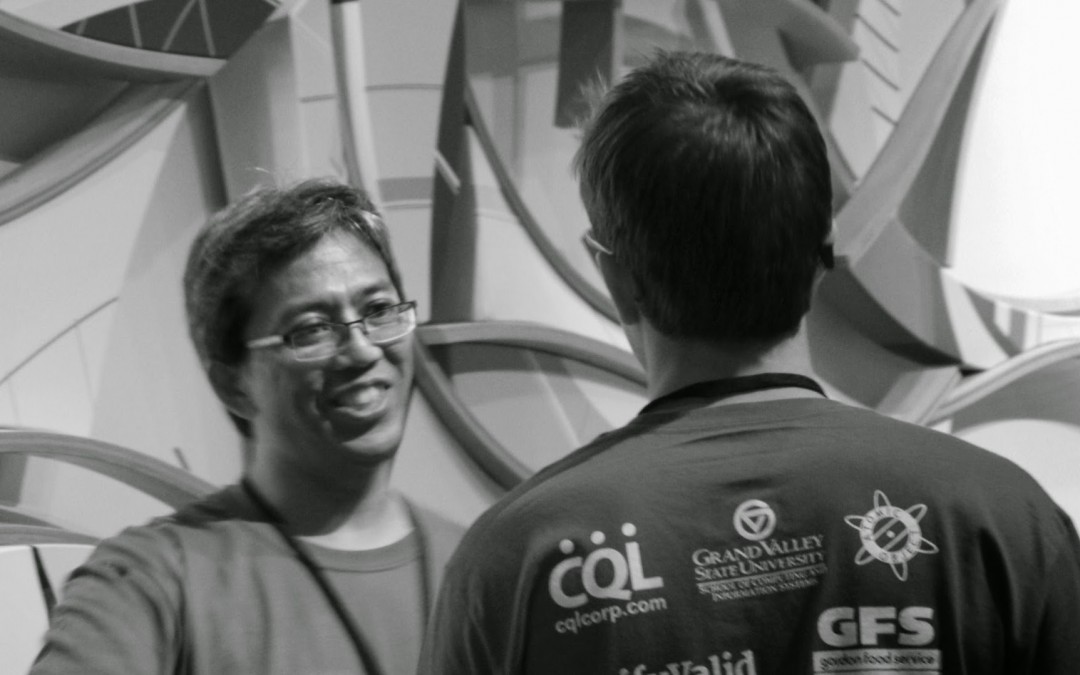 The 2014 Google I/O Extended Grand Rapids event was an absolute blast!   Hans and I represented GVSU’s School of Computing on the organizing committee and really enjoyed working with our fellow organizers (Adam Clark, Carlus Henry, and Dan Mikita) in getting this first-time (for Grand Rapids anyways) event off the ground.  It all started back in May when Dan and Carlus approached us with an itch that needed scratching very badly – they wanted to see if we could get an Google I/O Extended event off the ground in Grand Rapids in approximately six weeks.   Hans and I had actually had similar conversations together in recent years after we struck out in getting registered for the actual conference out in San Francisco, CA.   When we realized we had a critical mass of potential collaborators, we decided to go for it.  Given the incredibly good job Adam Clarke does in helping organize TEDx events, Mobile Monday, GR, etc. we reached out to him early on.  Adam was invaluable on the team, and its always a joy to work with him.

So what is Google I/O Extended Grand Rapids?

In case you’re wondering, Google I/O is Google’s annual software developer conference.  It’s an enormous event, as over 5k developers converge on Moscone Convention Center in San Francisco to learn about Google’s latest platforms and technologies.  In recent years, given the demand for tickets, it has been very difficult to get registered, with seats selling out in literally minutes.  Initially, the demand for the event seems to have been driven by the amazing amount of swag Google handed out at the events (and in the mail, post / pre event!).  In recent years however, they’ve raised the registration fee, so one would think that would start to eliminate some of the incentive, but apparently it has not.  The last time I was able to attend was 2010, and the most recent Hans attended was 2012.   To address this issue, Google has encouraged people around the world to organize “extended” events, where people gather at a local venue, watch the live streams together, and also have their own local speakers.   Google I/O Extended Grand Rapids was our first attempt at doing this here in the W. Michigan area.

How did it go?

The event went splendidly well!  Thanks to 13+ local sponsors we were able to host the event at GVSU’s beautiful Loosemore Auditorium in downtown GR.   Over 200 local developers (including a Google guy from Ann Arbor!) attended the event, learned about the new version of Android (and other Google technologies) and enjoyed lots of excellent food that we had catered in.   In addition, every attendee received a cool new Google I/O Extended GR t-shirt!

Food and swag aside, the most interesting part of the conference for us was to hear local speakers talk about how they are using Google platforms and technologies in the real world.   Dr. James Fahner, a local medical doctor spoke about opportunities for using Google Glass in a hospital setting.  On a related topic, Ryan Kerwin, a Ph.D. student from Georgia Tech who happens to be working as an intern this summer at Steelcase talked about how wearables such as Google Glass can be used in manufacturing.  Folks from GFS talked about their experience in using Google Apps to run their enterprise.  The content provided by Google was also quite informative.  We really enjoyed the keynote of course, and Ray Kurzweil’s talk on biologically inspired models of intelligence was also memorable.

We hope this was the first annual Google I/O Extended GR event.  Hans and I believe it is very important to provide opportunities like this to our local W. Michigan software development industry.  Attending local events like this not only helps developers get a leg up on new technologies, but also provides an invaluable opportunity to network locally with others working in the same field.   As CS faculty at GVSU, we enjoy seeing many former students who are now working as software developers in industry!

Photo a courtesy of Ashley Mikita.